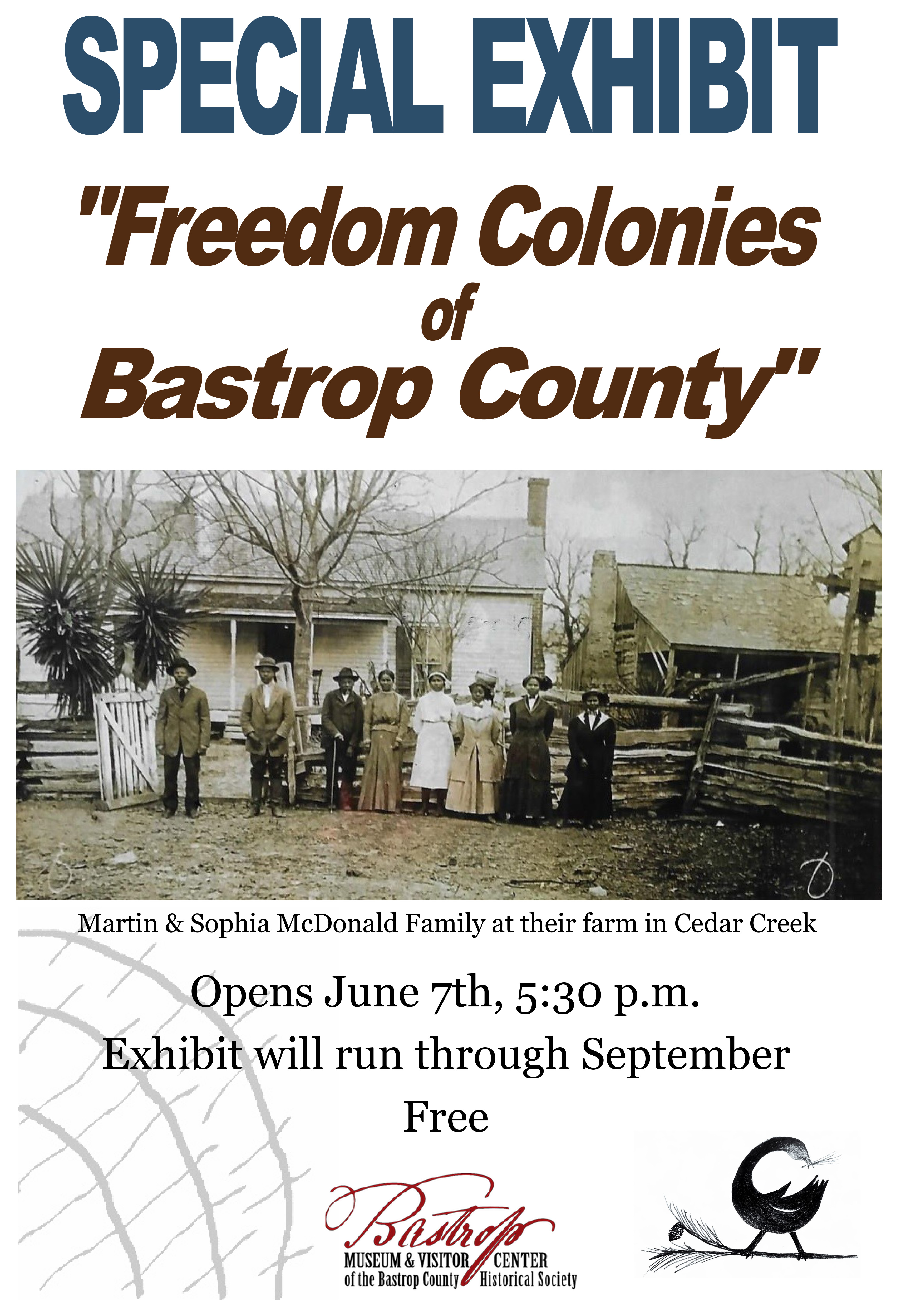 (BASTROP) Just down on the south corner of Main Street is the Bastrop Museum and Visitor Center. Here, locals and visitors alike are treated to permanent and rotating exhibits that give a glimpse of Bastrop’s earliest history from Indian occupied areas and ranching days, citizens’ military services and population influx associated with Camp Swift during World War II to a comprehensive photo record of Bastrop’s Historical Homes.

The museum has just added a permanent exhibit of a coal mine shaft denoting Bastrop County’s largest industry during 1902-1944, lignite coal mining. Also, opening earlier this month and running through September is an exhibit entitled “Freedom Colonies of Bastrop County” that allows visitors to become acquainted with the community’s freed slaves of Bastrop County established after the Civil War and through the early 20th century.

Running through September, The Freedom Colonies exhibit sets out to present and document the histories of freed slaves who established communities located in Bastrop County after the Civil War and through the early 20th century.

After consulting with Andrea Roberts, Texas A&M urban planning professor and founder of The Texas Freedom Colonies Project in 2014, Bastrop archivist Carol Kysar set out engaging families in the Bastrop County area who could shed some light on local Freedom Colonies by sharing oral histories, photographs, and artifacts.

At the peak of information gathering, Kysar worked with a 42-member team who shared their descendants’ experiences as earliest settlers in the Freedom Colonies and took the bulk of the material from notes and papers of TC Franklin, a slave descendant, educator, and historian on African Americans in Bastrop County.

Many Freedom Colonies are now marked by historic cemeteries or churches. Through Kysar’s and teams’ efforts, over 40 communities that might be or are Freedom Colonies were researched. They were able to develop histories for 12 of those in addition to the 13 that were identified in 2003 by the Texas State Historical Association.

These colonies include St. Mary’s Colony, settled in the county’s western stretches; Cedar Creek Colony, Salem Colony, located in the southern area of the county; Pleasant Grove Colony, settled north of Elgin; and the Colorado and Flower Hill colonies, located near Smithville. Many families are represented in Bastrop County’s Freedom Colonies and include family names such as Morgan, McDonald, Colter, Kellough, Hodge, Franklin, Haywood, Jones, Benford, and Washington.

“Without a doubt, the slaves and thereafter the freed slaves contributed greatly to the financial success of the county,” Kysar said. “Cotton was the major industry in the county and without the efforts, forced and unforced, this would not have happened.”

In 1888 a freed slave was elected County Commissioner and many educators, including a supervisor of the rural African American schools, came from families of these early settlers.

Census records show that by 1890, the African-American population grew to 43% in Bastrop County, about double of the state average. Today, the black population has dwindled to under 8%.

“Through the years since the inception of the museum in 1952 efforts have been made to rectify the lack of information, but none of the efforts were very fruitful,” Kysar said. “Now, finally, we seem to have found the right group at the right time.”

Anyone interested in viewing this free Freedom Colonies exhibit or contributing more information on this topic to the archives is encouraged to stop by the Bastrop Museum and Visitor Center at 904 Main Street, Bastrop or call 512-303-0057.

The Era of Coal Mines Recalled
in New Permanent Exhibit

Back in the days of the Roaring ‘20s and on through the Great Depression, people who knew of Bastrop County thought about coal—in those days (1902-1944), lignite mining was the county’s leading industry. The county held the largest deposit of lignite in the State.

And when folks who lived here thought about mining, they probably thought about the little company towns where the employers provided their workers with housing to live in, commissaries to purchase their food and supplies and schools to educate their children.

These long-forgotten communities—with names like Phelan, Sayers, and Calvin—were populated by miners who had been brought from Mexico by the mines’ operators. More than a dozen lignite mines were located between Bastrop and McDade.

Those are the elements highlighted in the recently opened Coal Mines exhibit.

In the depressed economy of the 1930s lignite produced through the shaft mining techniques characteristic of the Bastrop mines became increasingly uncompetitive compared to strip-mined coal and to petroleum, according to the Handbook of Texas.

The exhibit, designed by artist Lee Jamison, features an underground shaft leading into the earth, along with a mouse that acted as a “guard” on duty to detect imminent danger.

At the March opening ceremony, more than two dozen direct descendants were recognized for the achievement and culture of their ancestors.