Summertime Safety When Snakes Are Out

Summertime Safety When Snakes Are Out 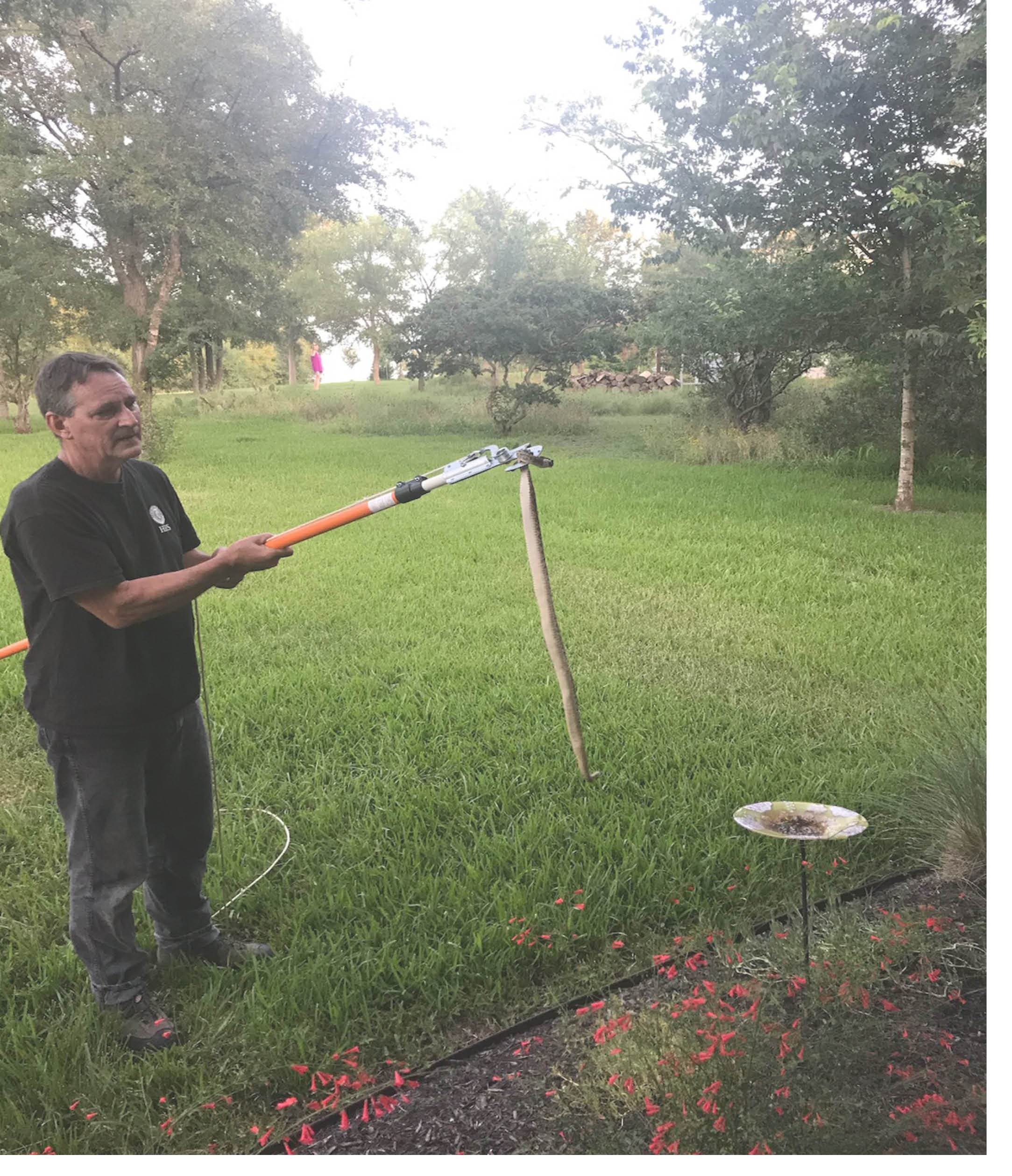 This 3-foot rattlesnake to the left was found this past weekend at our Stanberry bookkeeper's home in Bastrop. It was 2.5 feet from her while she sat out on her patio before she noticed it moving slowly through the verge. Keep diligent out there, folks!

Remember when all you wanted was for summer to finally arrive? Popsicles, pool times, and freedom from teachers and homework; we couldn’t wait to jump on our bikes and cruise the neighborhood all day or head off to camp with our fellow fun-seekers. Well, folks, it’s officially summertime in Central Texas. The kids are out of school, we’ve hit triple-digit temperatures, and we’re not the only ones looking for respite from the blazing Texas sun. Whether you're running around outside or cleaning out that shed or flowerbed, keep in mind the snakes are out.

Central Texas has a handful of venomous snakes that can quickly ruin your summer vacation if you're not paying attention. The good news, according to Texas Parks and Wildlife, is that you are more likely to be struck by lightning than to have a fatal snake bite but that doesn't mean to let your guard down when working and playing outside. 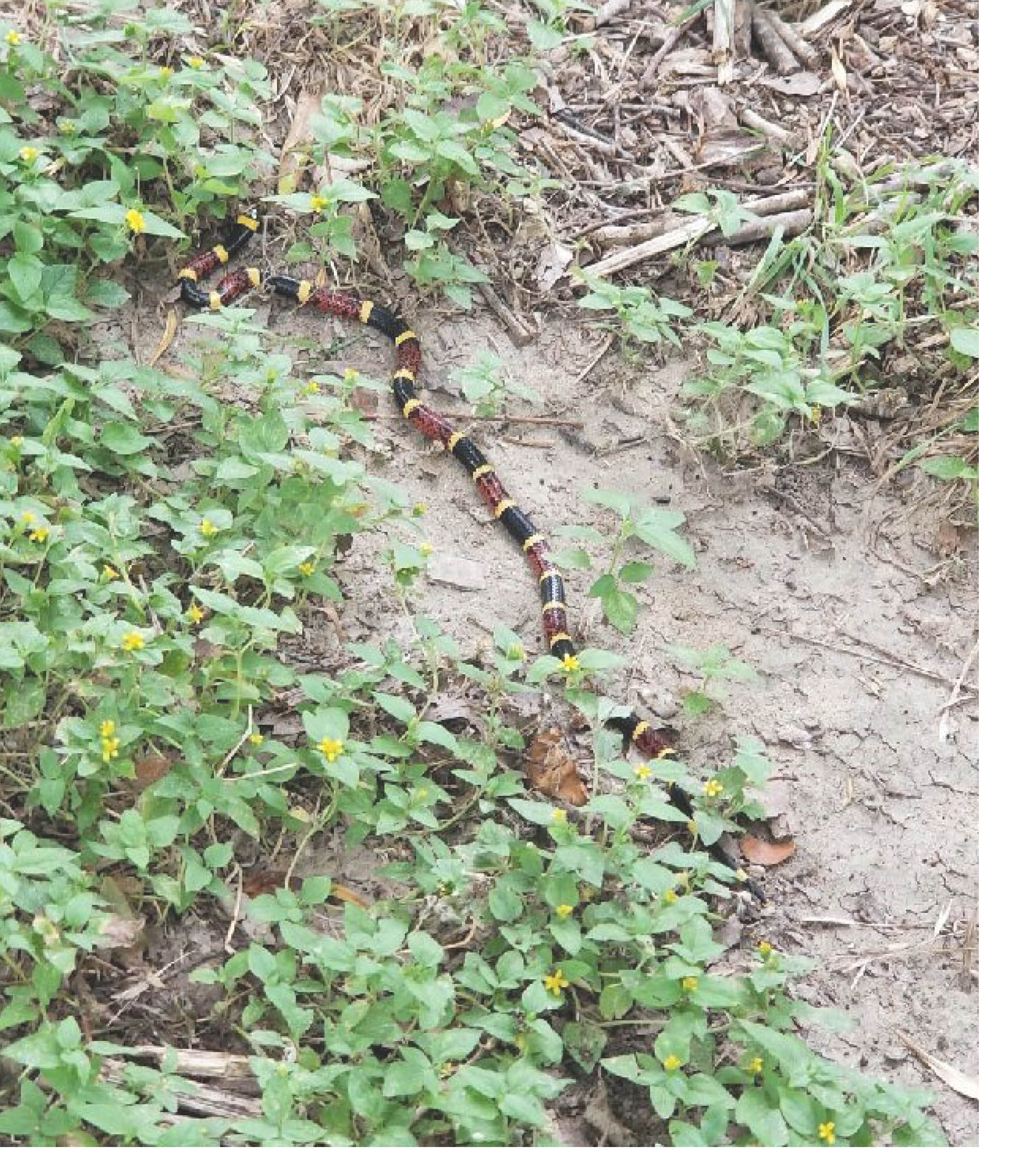 Just this past weekend, while camping with the Girl Scouts at Palmetto State Park, this 2.5-foot fella slithered through the middle of our campsite, right next to our tent as we were taking it down. Thankfully, Coral Snakes are not aggressive but they do have one of the most toxic venoms in the world.

Stanberry's resident outdoorsman, Jeff Stewart, commented that "you'd have to try really hard to get bit by a coral snake" since they are notoriously shy and have a fairly tiny mouth. Don't worry, Jeff, we aren't gonna try that anytime soon.

The most famous of our venomous snakes are the pit vipers, so called for the "pits" or openings in the sides of their head between the eye and nostril. These heat-sensitive pits allow the snake to detect animals in the dark during their prime evening hunting time. They can be aggressively defensive and will bite if threatened. The best course of action if you spot a pit viper in the wild is to back away as quickly as possible and let it be. 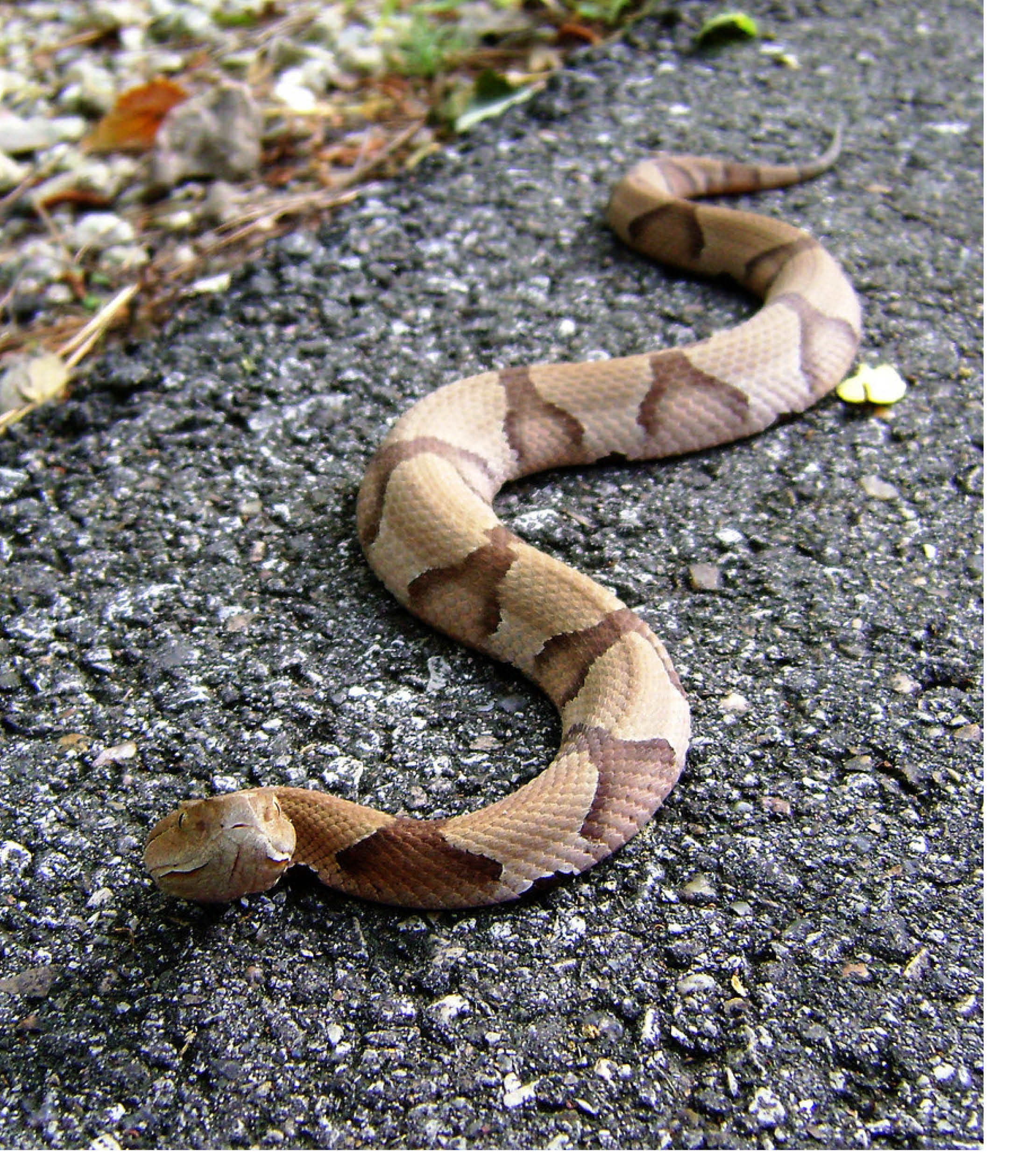 Among the most common snakes in North America is the Copperhead. Copperhead snakes grow to around 2-3 feet in length and are heavy muscular snakes that are light reddish-brown or gray with the distinctive stripe patterns seen here. You can find Copperheads in just about every environment in Central Texas. They live near water, tall grass, under logs and debris, and just about anywhere they can find cover. Fortunately, according to Live Science, their venom is seldom fatal for humans.

My mom is a life-long scavenging blackberry picker and will stop at any fenceline or railroad track to pick vines clean in the summertime. This usually means she's wading through thick, tall grass to get to the sweet and thorny treasures. She never goes wading into the brush berry pickin' without her rain boots and an old golf club to rustle the grass and shrubs before reaching in to grab the fruit specifically because of this creature right here.

Copperheads don't usually strike but they will bite if you get close so use caution when reaching into places with little or no visibility like behind shrubs and tall grass or lifting debris. I don't know about you but I like my surprises with balloons and cake, not fangs and a trip to the emergency room. 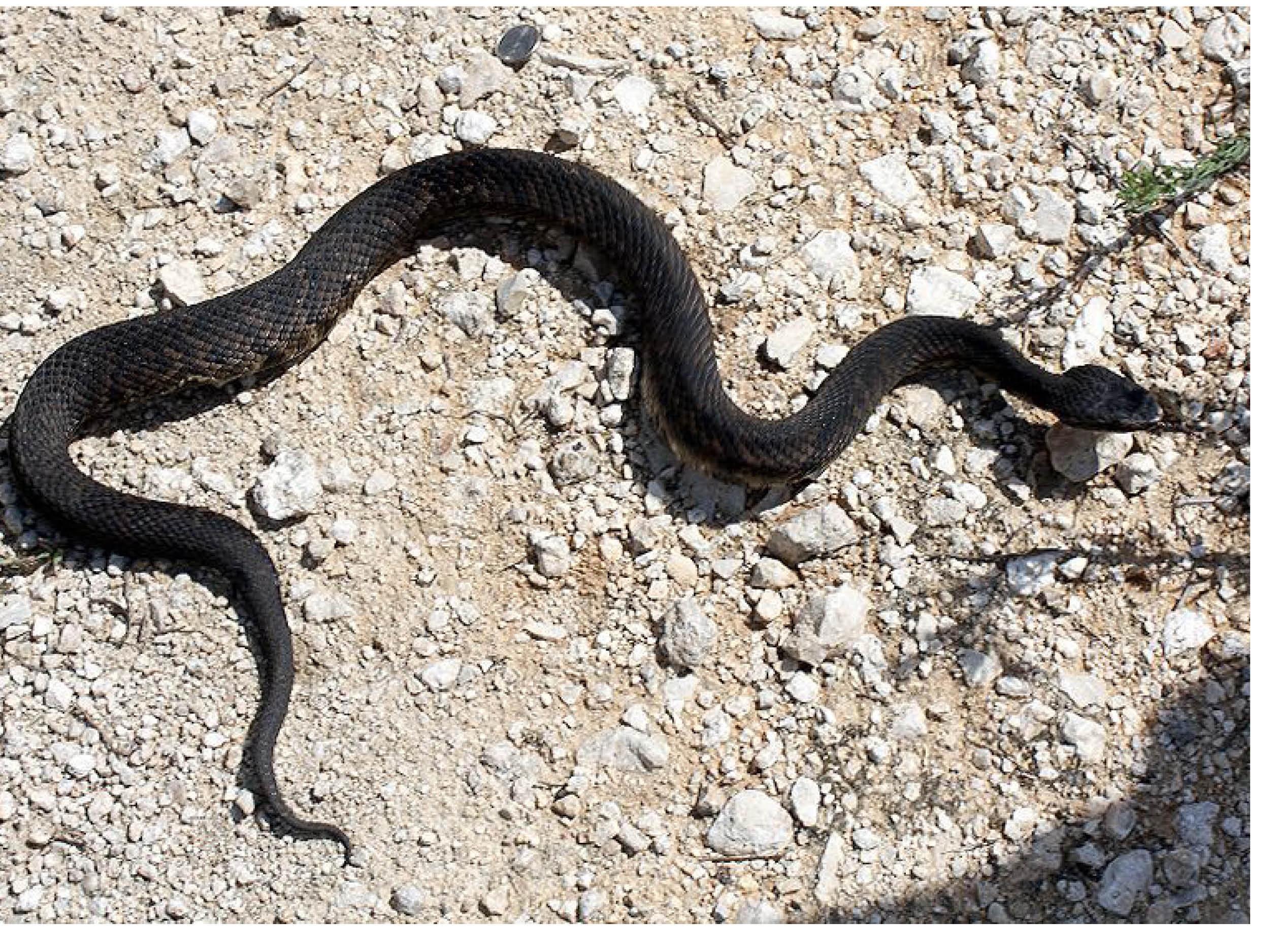 As any long-time lake or river junkie will tell you, there aren't many snakes that strike fear into their hearts quite like the Cottonmouth, aka the water moccasin. These big, thick-bodied snakes don't usually bite humans but they can be aggressive when disturbed both in and out of the water. While comfortable swimming and sunning themselves, they don't typically stray far from the shore and they are the only water snake that can bite while swimming.

Cottonmouths can grow up to 4-feet in length and, according to the Savannah River Ecology Laboratory, "they can be beautifully marked with dark crossbands on a brown and yellow ground color or completely brown or black. Older adults are often dark and solid-colored whereas the juveniles are brightly patterned with a sulfur yellow tail tip that they wiggle to attract prey." They like to munch on small amphibians, fish, turtles, and even other snakes and cottonmouths.

These snakes can swim completely submerged or along the top of the water where their entire bodies can be seen. Having grown up on Lake Conroe near Houston, I've seen my fair share of these guys. Even though I know a bite is unlikely, I still get the heebie-jeebies when I picture that river crossing scene from the TV series, Lonesome Dove (1989). This is definitely a snake to let lie when you see one in the wild. 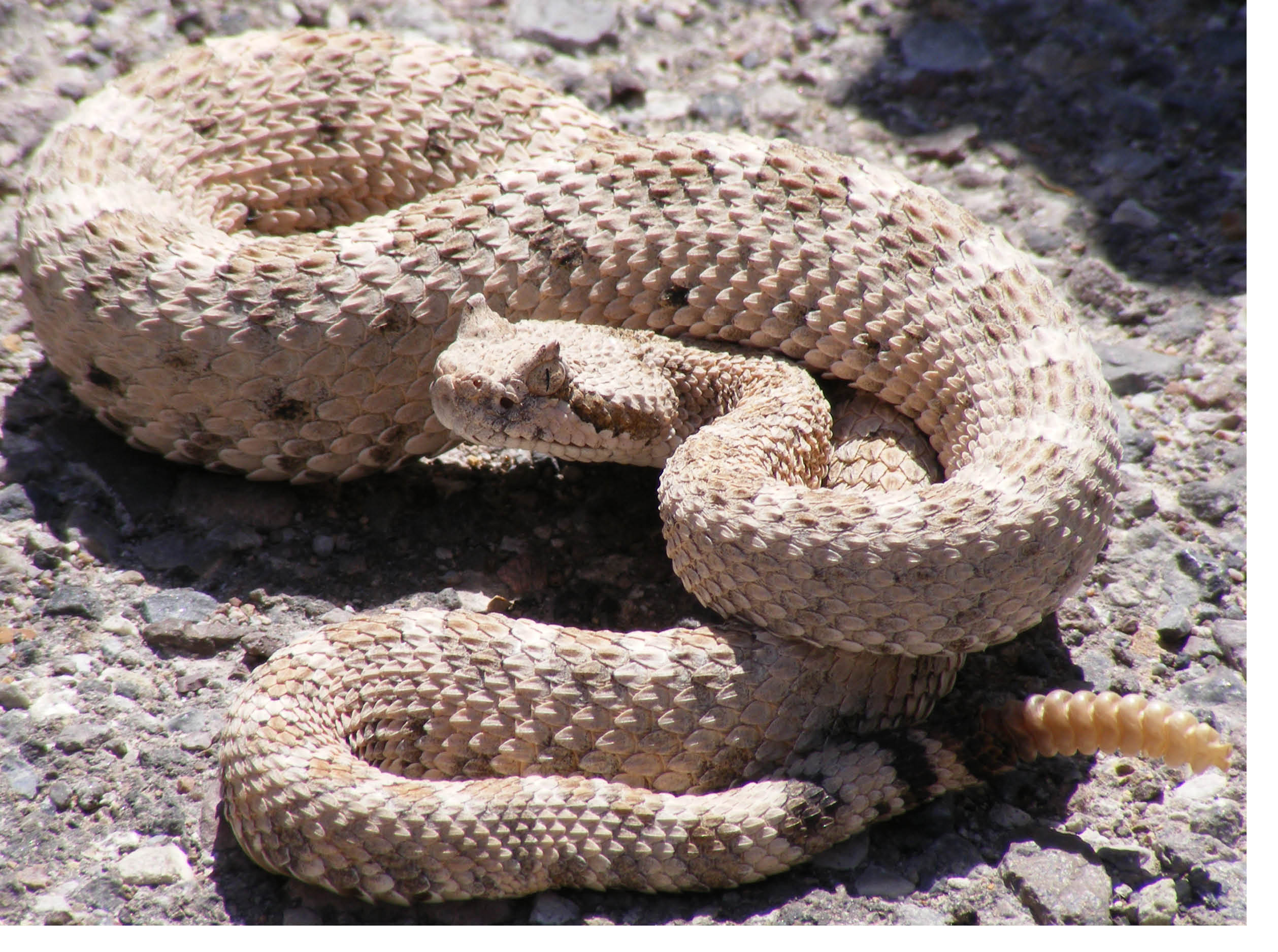 I remember walking along a dirt path with my black lab, Suzie Q, around the lake when I was about 6-years old. She suddenly snarled and grabbed me by the bottoms of my bathing suit and pulled me back, knocking me to the ground. Standing in front of me protectively she growled, hackles up, as that famous sound filled the air. She saved me from stepping right on top of the rattler sitting in the road, sunning itself in the dirt. It's the only rattlesnake I've ever seen in the wild but sometimes, I still dream about that sound.

If you've ever heard the sound of a Rattlesnake, you know it's one you'll never forget, too. It's a sound that screams, "back off, buddy!" mixed with an instant injection of adrenaline to the system. Found only in the Americas, Rattlesnakes have long lived in the lore of the U.S., such as the depiction of the rattler on the famous Gadsden flag from the American Revolution. Texans, with our "everything is bigger and better here" attitude, harbor a special fascination for the mythos of these creatures.

Rattlesnakes can grow up to 6-feet in length and are brown to light greenish-gray in color but all have the tell-tale rattle on the tip of their tails. Rattlers have been seen over the years at almost 7-feet, however, snakes of this size are very rare. They prey mostly on rats and mice and, as Andrew Stewart in "Beware the Buzzworm: Rattlesnakes in West Texas," said, "You wouldn’t welcome a rattler at your doorstep, but they do provide a service. Rodents are vectors for disease such as Hantavirus and Chagas."

-If you see a snake, don't try to pick it up or shoo it away with your bare hands. Back away and let it be. The idea that "the only good snake is a dead snake" is typically what gets people bitten. Snakes are valuable to the ecosystem so just leave it alone.

-If you're going to be in hiking, swimming or working outside keep an eye out for snakes. Your eyes are your best defense.

-Don't reach your hands into crevasses or into debris where you can't see. Move grasses or discarded building materials out of the way carefully before just reaching in with your hands or face.

-Keep the areas around your home clear of excess leaves, sticks, and trash to keep rodent populations down and to remove hiding spots for critters.

-Do these things to keep you and your loved ones safe and have a terrific summer!